Wind Turbines through the ‘Gap of Dunloe’ – aagghh!!

By The Septic Sceptic

On a recent trip to Kerry in Ireland I happened to stop at a beauty spot on the rim of the ‘Black Valley’. The place is called ‘Moll’s Gap’ the view across the ‘Black Valley’ is stunning, particularly on this rare occasion when there was sun and no rain! It was a walk down memory lane, across the valley I could see the ‘Gap of Dunloe’ where on my honeymoon, 35 years ago, I had travelled on horseback with my new bride (in driving rain and fog). The illusion of a pristine view was shattered when I spied 4 wind turbines through the ‘Gap’, on grabbing my binoculars my heart sank as I saw 3 more. What else is there to say. Clearly there is no view so pristine, no vista so pure that the Irish Government will not allow the wind turbine mafia despoil. 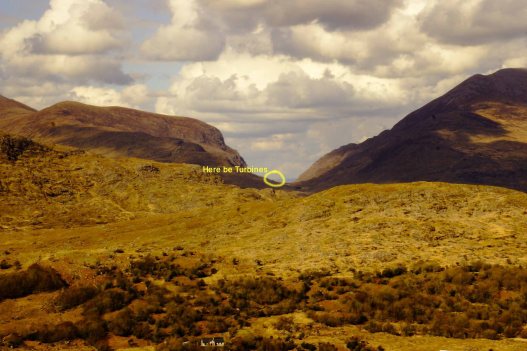 By The Septic Sceptic
You might think that this is a rather obvious statement, but that is not what I mean. Whenever statistics about wind turbine output or unit energy costs are given out by government or the renewable energy industry – there is always a large element of spin. Generation capacity is always given on the basis that the turbine is generating electricity 100% of the time. They have simply adopted the norm for the energy generation industry. The  same would hold true for a gas, coal or nuclear plant, so what is wrong with that? I’m sure you’re way ahead of me here. Yes of course, coal, gas, nuclear and hydro power plants average 85% output in one year. Germany estimates that it will get just 30% of its wind turbine capacity in actual power generated. Very naughty – just over a third of the power generated by conventional means. But it gets worse. That is what Germany estimated they would get. In actuality, over a ten year period all they got was 16%. That is why they are building 23 new coal fired power plants, that and of course the fact that wind generated electricity is 50% more expensive than the cost of conventionally produced energy. But here again that is not the whole story. When conventional backup power (remember wind power is only available 16% of the time) is included in the cost and when extra power transmission costs from disparate remote areas and power loss over long distances are taken into account the real cost is almost three times that of the most efficient new gas plants.
Just like any other information you get from politicians or vested interests, wind energy figures have been spun to death.

By The Septic Sceptic

Last week the new UK Energy Minister John Hayes slapped a moratorium on any new (that have not already been sanctioned) onshore wind turbines. I do not imagine that this decision will go unchallenged. The British Conservative parties coalition partner, the Liberal Democrats, will have something to say about it as well as the myriad of vested interests that are going to suffer from this decision. Expect skin and hair to fly over the coming months as Hayes attempts to make his radical manoeuvre stick.

This is not the end of the wind energy boondoggle, No Siree, Bob! Notice the weasel word ‘onshore’ used in the announcement. The British Government are still ploughing ahead with the equally wasteful and vastly more expensive ‘offshore’ wind farms, but at least it’s a start. Perhaps we will get some more dialogue on the subject and move it more into mainstream politics so that Joe and Joanna public can see where there tax pounds are being wasted.

More on this   and here